Jackie Huber was bestowed her new rank at a ceremony at Bismarck State College on Monday. She is a Bismarck native and a University of North Dakota graduate. 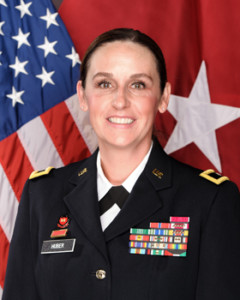 Huber is the second female brigadier general in the north Dakota national guard’s history. She has most recently served as operations officer for the Joint Force Headquarters’ domestic operations section and has been the guard’s Director of Human Resources for the past 10 years.

“When I reflect back on these many assignments from Lieutenant to Colonel, I see so many amazing soldiers’ faces that affected me and helped shape me into the leader that I am today,” BG Jackie Huber said.

One year after enlisting in 1989 Huber served in operations Desert Shield and Desert Storm. She was also deployed during Operation Iraqi Freedom in 2003.

You can watch BG Huber’s full promotion ceremony below.