Another Construction Project Leaves Deer Creek Neighborhood With One Way Out

The drain improvement project will go on for three weeks

FARGO, N.D. — Road construction season is well underway, and neighbors in one South Fargo neighborhood are sure feeling the effects with yet another project.

A drain improvement project on 63rd Street South starts May 15 and will go on for three weeks.

For people in the Deer Creek neighborhood, there will only be one way out once the 52nd Avenue South entrance closes.

“These things tend to go pretty quickly with these box culverts. All the pieces are made, it’s just dig it up, get the base put in, we have to move the water main, but then you start putting it together kind of like Legos,” Kevin Gorder, division engineer for the city of Fargo, said.

The only way out of the neighborhood will be the Deer Creek entrance at Sheyenne Street. That street north of 52nd is closed to thru traffic but still has local access.

The intersection of County Road 17 and 76th Avenue South is also closed to build a new roundabout.

Crews will be adding traffic control measures as they see fit. They’ve decided to add a four-way stop at the Deer Creek exit onto County Road 17.

“It’s really trying to get this infrastructure caught up to the development that’s down there and all the things that have happened here in the last few years, you put a project together, it takes about 4–5 years to get them developed, and you have to get through construction and then hopefully when we’re all done we have some really nice roads,” Gorder said.

Some neighbors say they would’ve preferred the different projects to be done in phases. Others say it will be worth it in the end.

“We’re going to have a headache this summer, but next summer it won’t be here. Got to get worse before it gets better,” Dennis Hillebrand said.

There have been concerns about first responders getting access. F–M Ambulance has partnered with Edge Fitness in the neighborhood to have an ambulance stationed there during the week. Fargo and West Fargo Fire Departments will both respond to calls in the area.

“We’re trying to support the growth out here and it just takes some planning and takes some time to do that,” Gorder said.

“It’s got to be done. We have to have it in order to have decent stuff here,” Hillebrand said.

Deer Creek Elementary, which is also under construction in the area, will be opened in August. 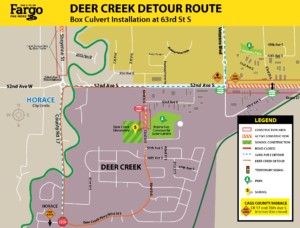 Woman accused of faking kidnapping wanted a break from husband