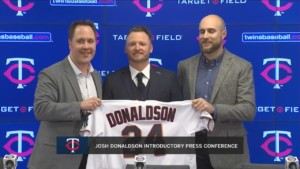 MINNEAPOLIS – (FOX 9) The Minnesota Twins didn’t leave any details out as they introduced the newest, biggest free agent in franchise history on Wednesday at Target Field.

Third baseman Josh Donaldson, 34, signed a four-year, $92 million contract with an option for a fifth year to join what was one of the most dominant lineups in Major League Baseball last season. Donaldson was announced at his introductory news conference like he will be on Opening Day at Target Field in the lineup, in front of family, friends and several members of the Twins’ organization.

Donaldson, along with Chief Baseball Officer Derek Falvey, stood and watched as they played a highlight reel of him before he took the stage. He had options in free agency, but ultimately decided the lucrative long-term contract, playing at Target Field and for an organization coming off winning a division title was too good to pass up.

Donaldson has spent most of his career, which started in 2010 with the Oakland Athletics, playing on 1-year contracts. His deal with the Twins is the largest in free agency in the history of the franchise.

“There’s been a lot of people involved with this moment today. This is what I’ve played my entire life for,” Donaldson said. “I enjoy winning.”

The Twins won 101 games last season to take their first American League Central Division title since 2010. Many thought the primary focus in the off-season would be to add an ace starting pitcher to compliment Jose Berrios. They’ve brought back Jake Odorizzi and Michael Pineda, and brought in Homer Bailey and Rich Hill.

“When we went into this offseason, our goal was to find a way to impact this team in a significant way. In Josh we certainly found that. This guy is a winning baseball player through and through,” Falvey said.

Donaldson labels himself on social media as “@BringerOfRain20” – He says it goes back to the TV series “Spartacus Blood and Sand.” Spartacus killed a legend in an arena, and ended a drought that had lasted several months.

“He conquered, and it started to rain. I feel like I’ve conquered some giants in the world. I said I like the nickname, I’m going to take it,” Donaldson said.

The recruiting process to bring Donaldson to Minnesota included a phone conversation last month with Thad Levine, Falvey and manager Rocco Baldelli that lasted nearly three hours. It also included Sano, who spent last season with the Twins at third base, offering to give up his spot on the hot corner and move to first base to make room for Donaldson. One negotiation still ongoing is with Rosario for the No. 20 jersey. He posed for pictures on Wednesday with a No. 24 jersey.

Even tennis star and Minnesota native Mardy Fish, a friend of Donaldson’s, got involved. He did his homework on every team that had interest, and it’s why he waited until well after MLB’s Winter Meetings to make a decision. In the end, he was sold after talking to Twins’ brass.

“I went with zero expectations. One of the biggest things I took out of that conversation, there wasn’t much of a quiet moment between any of us,” Donaldson said.

Donaldson is a six-time All-Star, with his first All-Star Game coming at Target Field back in 2013. Now, he’ll hit there 81 games a season for least the next four years.

He was the AL MVP in 2015, hitting 41 homers, driving in 123 runs and hitting .297. Donaldson is a three-time All-Star, and doesn’t just do damage at the plate. He’ll be a regular starter at third base, where in 417 total chances last season, he had just 13 errors, turned 38 double plays and had a 96.9 fielding percentage.

He didn’t come to the Twins just to hit home runs and defend third base. He wants his time in Minnesota to be deeper than that. The Twins feel adding Donaldson turns them from a playoff team into a World Series contender.

Making Some Noise In A Quiet Area

Once Popular McDonald's In Fargo Reduced To Rubble