HORACE, N.D. – A code red alert was issued as police searched for a burglary suspect in Horace.

The Cass County Sheriff’s office received a call around 11:30 Wednesday morning of a burglary in a garage on the 8100 block of County Highway 17.

A man was found in trees, ran from detectives and the alert was issued as police searched for him.

He was tracked to a home on the 7800 block of Brink Drive where someone noticed the suspect on a ring camera hiding near the house.

Deputies used a drone and West Fargo Police assisted to find the suspect with a K9. The man was found underneath a bush in front of the home and was apprehended by the K9, the sheriff’s office said. 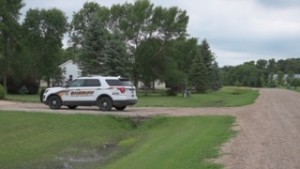 41-year-old Nick Mackner was arrested on two counts of criminal mischief and one each of trespassing and failure to halt nearly three hours after police responded.

He was taken to Essentia Hospital in Fargo and later taken to jail.

The sheriff’s office says they’re investigating  if anything was taken from the garage and says nothing was found on Mackner when he was taken into custody.