Goldeyes Win 5th Straight To Get Sweep Of Redhawks 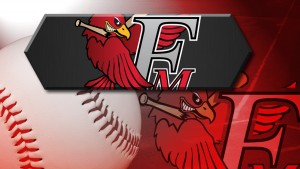 FARGO, N.D.  – Darnell Sweeney hit a solo home run in the eighth inning off RedHawks reliever Tyler Wilson (0-1, 18.00 ERA) to give the Winnipeg Goldeyes (14-8) all the offense they would need to secure a series sweep of the Fargo-Moorhead RedHawks (7-15) on Sunday afternoon at Newman Outdoor Field. The Goldeyes added another run in the eighth to make the final 2-0 in favor of the home side on the scoreboard.

The first seven innings of the game showcased each team’s starting pitcher as Matt Tomshaw (0-2, 5.40) and Frank Duncan (3-1, 2.73) each threw seven shutout innings but didn’t factor into the decision. Tomshaw struck out seven batters and walked one while giving up six hits in 7.0 innings pitched. Duncan Struck out five and walked none while giving up six hits in his 7.0 innings of work.

Tyler Wilson, a 2020 American Association Dispersal Draft selection from the Cleburne Railroaders, made his first appearance for the RedHawks in the eighth inning. Wilson gave up the solo homer to Darnell Sweeney and another run on a Logan Hill RBI single to earn the loss.

Leobaldo Pina was the only RedHawks player with multiple hits in the game. Pina went 3-for-4 with a double in the ninth inning. Drew Ward was ejected from the game in the top of the sixth inning after arguing balls and strikes with home plate umpire Jacob McConnell.

The American Association will take Monday off before play resumes on Tuesday. The RedHawks will host the St. Paul Saints (9-11) for a three-game series at Newman Outdoor Field beginning Tuesday night. Tuesday night’s game will be the first meeting between the clubs since the 2019 AA North Division Championship Series that St. Paul won three games to two. First pitch is scheduled for 7:02 p.m. on Tuesday night.