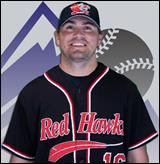 FARGO, ND – The Fargo-Moorhead RedHawks have sold the contract of right-handed pitcher Frank Duncan to the Colorado Rockies, the club announced Wednesday.

Duncan is the 83rd player in RedHawks history to have his contract purchased by an MLB club and the third in 2021 after Matt Tomshaw and Drew Ward had their contracts purchased by the Chicago White Sox and Detroit Tigers, respectively. Duncan previously played in the Rockies organization in 2018 with the Double-A Hartford Yard Goats.

Duncan, who signed with the RedHawks on April 13, is entering his eighth season of professional baseball in 2021. He originally signed with the Pittsburgh Pirates organization in 2014 after he was taken by the Bucs with the 401st overall pick in the 13th Round of the 2014 MLB Amateur Draft out of the University of Kansas. He was previously drafted in the 39th Round by Cleveland in the 2013 MLB Amateur Draft.

The San Francisco, Calif. native went 5-7 in 2020 with a 4.84 ERA in 13 starts for the Winnipeg Goldeyes while calling Newman Outdoor Field home due to the pandemic and the closure of the Canadian border. He was acquired by the Goldeyes from the Kansas City T-Bones in Round 2 of the 2020 American Association Dispersal Draft. Duncan also made one start and four total appearances for Aguilas del Zulia in the Venezuelan Winter League this past offseason, pitching to a 20.25 ERA in 5.1 innings of work.

After signing with the Pirates, Duncan spent five seasons in the affiliated minor leagues split between the Pittsburgh, Arizona, Colorado, and Los Angeles Dodgers systems. He reached the Triple-A level in 2016 and 2017, making 41 combined starts and appearing a combined 42 times for Indianapolis (Pittsburgh) and Reno (Arizona) and appeared in two MLB spring training games for the Diamondbacks in 2017. He joined the Sussex County Miners of the Frontier League in 2019 and went 10-6 with a 3.05 ERA, throwing a no-hitter in a 3-0 win on June 13, 2019 against the New Jersey Jackals.

Duncan played four seasons of college baseball at the University of Kansas in Lawrence, Kan. from 2011-14 and went a combined 16-21 with two saves and a 3.22 ERA for the Jayhawks in 78 collegiate appearances (43 starts). A civil engineering major, he earned Big-12 All-Conference honors as a senior in 2014. He played high school baseball at Stuart Hall in San Francisco, Calif. and also lettered in basketball and soccer.

The Fargo-Moorhead RedHawks will begin the 2021 American Association May 18 on the road against the Cleburne Railroaders before returning home May 25 for the home opener against the Chicago Dogs at Newman Outdoor Field. The RedHawks will host two exhibition games at Newman Outdoor Field May 11-12 against the California Dogecoin before the start of the regular season. The RedHawks are celebrating the team’s 25th anniversary in 2021 and will honor 25 summers of fun with special promotions, giveaways, and player recognitions all summer long.

RedHawks Put Up 17 Runs to Take Series Over Chicago

RedHawks explode for 11 runs in series opener against Chicago

Seven Runs Too Much To Overcome For Redhawks On Sunday