UPDATE: Fargo man arrested for murder in the death of Moorhead taxi driver

Moorhead Police say when they arrived on the scene, they found a man in the driver seat with suspicious trauma to his body.

UPDATE: Eighteen-year-old Willie Sparkman of Fargo has been arrested for second degree unintentional murder and aggravated robbery in the death of 24-year-old Abdullahi Mohamed Abdullahi of Moorhead. 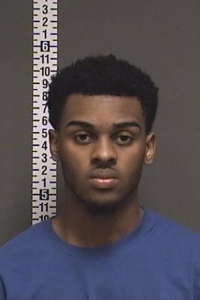 Moorhead Police say Sparkman shot Abdullahi during a planned robbery and they do not know each other.

Police say the first robbery happened in the 3100 block of 27th Street South at 11:50 PM on Tuesday May 4. Authorities say a female said she was approached by a male with a weapon who demanded her property. The female screamed and the suspect fled.

No one was hurt.

Fargo Police says through an investigation with multiple departments, Sparkman was taken into custody without incident. He is in the Cass County Jail.

“Approximately 3:30 this morning, our officers were dispatched to a vehicle crash in the 3000 block of 20th street south. Upon arrival, the officers noted the vehicle actually traveled eastbound and crossed the railroad tracks and then onto the other side,” Moorhead Police Department Captain, Deric Swenson said.

Authorities say traumatic injuries to his body were found not related the crash.

Captain Swenson says the body has been transported to the Ramsey County Medical Examiner’s Office for an autopsy.

Police taped off the parking lot across the street at an apartment complex.

“The roadway in that area runs north and south. The vehicle was eastbound when it crossed the railroad tracks, so part of the assumption will be is that they were in a parking lot prior to them leaving, so what we’re doing is just processing a bigger area so we don’t miss anything,” Swenson said.

Moorhead Police are working with the BCA and the Clay County Sheriff’s office.

“This is a very open investigation. The case is involving. We have a lot of information that we believe we’re able to have some type of conclusion coming up with this case, however, at this time no one is in custody or charged out on this incident,” Captain Swenson said.

A GoFundMe account has been set up for Abdullahi. Money raised will go towards funeral costs. Click here to donate.