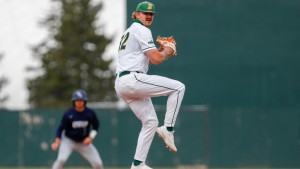 FARGO, ND (KVRR) – Parker Harm made some more history for NDSU baseball, becoming the first Bison in the D1 era to be named an ABCA All-American and the fifth in program history.

It comes after the senior set a school record with over 15 strikeouts per nine and a tied one with 12 saves. Harm ends his career with 15, the 2nd most by anyone to wear the Green and Yellow. He hopes he’s able to continue playing. How would he feel about playing in the American Association if it the option was on the table?

“I definitely think it’s a good option if nothing happens with the draft,” Harm said. “It’s definitely an option in my mind after that to keep playing cause I don’t want to stop playing right now.”

Harm has a workout for the Royals in the near future.