Over 100 statewide leaders expressed their concerns and told their stories but one common theme kept overlapping...erasing the stigma 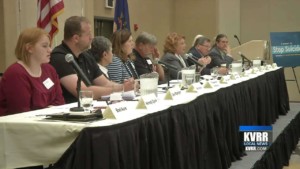 Over 100 statewide leaders shared their experiences and opinions.

Every 63 hours, suicide kills one person in North Dakota.

“Some of these deaths have been five, six years ago and the pain is just as raw as it was and they want to know that their suffering won’t be shared or happen to anyone else,” said North Dakota Democratic Senator, Heidi Heitkamp.

Senator Heidi Heitkamp is reaching out to families, friends and neighbors who have lost a loved one to this disease.

“They are not alone, that this is a problem we need to take out of darkness, and we need to say no one’s ashamed of getting cancer no one should be ashamed of having a behavior and mental health challenge,” Heitkamp said.

Over 100 statewide leaders expressed their concerns and told their stories but one common theme kept overlapping…erasing the stigma.

“I came to the realization the other day, how many suicides are going unnoticed every day?”

“The stigma towards suicide was actually substantially higher than it was towards any other healthcare issue among the primary care providers themselves.”

Each one having a different insight on how to create change.

Some spoke about the difference between suicides by war veteran compared to suicides of others while others discussed needed environmental changes within schools.

“It all starts from rumors. We don’t have the support that we need to address the problems,” said Aden Falk, a senior at Century High School.

The times have changed, and social media plays a big role.

“It seems like you’re connected but you really aren’t like I think it’s that sense that you got a lot of friends but really does anyone talk to you and ask you how you’re doing? Someone noticing behaviors unusual?” said Cindy Miller, the executive director of FirstLink.

As many asked their questions…

“I would like to know how we can get equal services for all the residents of our state.”

While explaining how different approaches could change the outcome of life or death.

“It really highlighted for us the fear not just among people talking about suicide but the fear of health professionals actually addressing suicide directly.”

It may be a work in progress but opening up the conversation on a state wide level is the first step in the right direction.

After the group discussion, smaller groups broke off for workshops.

They submitted their recommendations and ideas to Senator Heitkamp.

Davies Girls Basketball Ready to Run it Back

NDSU students design games to get children involved in STEM