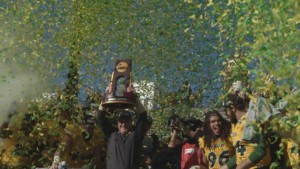 The senior was NDSU’s leading rusher with 118 yards on the ground and three rushing touchdowns.

He becomes the all-time winningest quarterback in the FCS at 49-3 passing former Bison quarterback Brock Jensen.

Klieman will fly back to Fargo with the team and then begin his tenure coaching the Kansas State Wildcats.

Protesters March Across F-M Area Over Death Of George Floyd

Some Minnesota Target Stores Adjust Hours Because of MSP Protests

Hundreds plan to march for George Floyd in Fargo on Saturday

Friends And Family Celebrate The Life of James Nyei