Earlier today we saw this post from the @mnGOP in Clay County, comparing Sen. Bernie Sanders to Hitler.

There are a LOT of reasons this is a ridiculous, spurious comparison, and even more reasons why its deeply offensive, and anti-Semitic. pic.twitter.com/jo93pq7FFc

The Clay County GOP says the post was shared by a volunteer. In an email asking if the volunteer is still involved with the group, Clay County Republicans replied with the same apology from its Facebook page.

The post from the #conservatives Instagram page compared policy decisions between the two men such as “promised a political revolution” and “believes state power would fix” their respective countries.

Jewish Community Action in Minnesota tweeted Monday “There are a LOT of reasons this is a ridiculous, spurious comparison, and even more reasons why its deeply offensive, and anti-Semitic.”

“Comparing any Jew to the Nazis is bad form. Hitler was responsible for the murder of 6 million Jews. This is especially gross because Bernie Sanders has talked publicly about *his own family members* murdered in the Holocaust,” JCA also tweeted.

MNGOP Chairwoman Jennifer Carnahan condemned the post in a statement.

“The recent Facebook comment posted by a volunteer with the Clay County Republican Party is not appropriate and the MNGOP does not condone these actions or their sentiment. We must, Republicans and Democrats alike, do better to dispel hate and come together as Americans,” Carnahan said.

Carnahan’s words come two weeks after she called on Democratic Minnesota Congresswoman Ilhan Omar to resign from the House Foreign Relations Committee over a tweet she shared that was condemned as anti-Semitic. Omar implied members of Congress are being paid to be pro-Israel. She has apologized.

This isn’t the first time a Facebook post from a Republican group in northwest Minnesota has come under fire. In 2017 the Minnesota 7th Congressional District Republican Party page posted a picture of then Congressman Keith Ellison, a democrat, calling him a “goat humper.” Many found this comment offensive because the now Minnesota Attorney General is Muslim.

Carnahan called the post “repugnant hate speech” that “in no way reflects the values of the Minnesota Republican Party.” 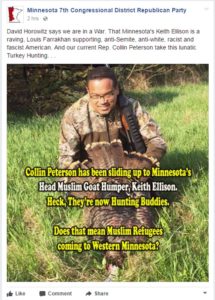