UPDATE WITH VIDEO: SUV Strikes Power Pole, Flips on Its Top in Fargo

The driver of a car loses control and takes out a utility pole before the car lands on its top.

The crash happened around 4:00 Thursday at the intersection of University Drive and 1st Avenue South in Fargo.

Police say the driver was conscious when they got to the scene. They shut down University between First and Second Avenues for at least two hours while the utility company replaces the pole.

“The driver is being treated for what appear to be non-life threatening injuries. There was a juvenile in the car who is uninjured, and we are continuing the investigation. This will impede traffic for quite an amount of time including the rush hour,” Fargo Police Sgt. Mark Lykken said.

Authorities say the scene was cleared around 6:30.

University Drive is down to one lane as crews repair the power pole. 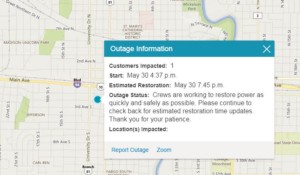 The power is out for some Xcel customers in the area. According to the power company’s website, it hopes to get it restored by 7:45.

Food Safety For The Fourth