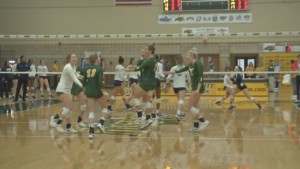 NDSU (13-15, 8-8 SL) takes the season series with ORU. The Bison will be back in action on Friday, Nov. 22 at 4 p.m. Central Time against Omaha in the Summit League tournament quarterfinals in Denver, Colo.

Abbi Klos, the lone senior for the Bison, finished with 9 digs in her final home match at Benson Bunker Fieldhouse. Kelly Johnson had 29 assists, while Kalli Hegerle had 27 assists, along with 4 blocks and 4 kills.

Oral Roberts (8-22, 4-12 SL) were led by Sakira Lacour, who provided 13 kills and 3 blocks, while hitting .444 for the Golden Eagles. Katrina Mikulic added 13 kills and 11 digs, and Cece Madison combined with Sarah Thiessen for 30 digs, 15 each. Sylvia Lawson had a match-high 45 assists.