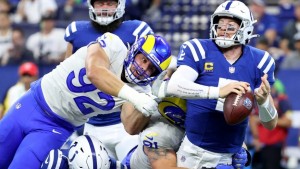 INDIANAPOLIS — (FOX 59) The Indianapolis Colts begin the season 0-2 after coming up short Sunday against the Los Angeles Rams in a 27-24 loss.

Perhaps more concerning than the 0-2 hole Indianapolis finds itself in is the status of Carson Wentz. The quarterback left the game late in the fourth quarter with an apparent ankle injury.

Down 27-24, second-year QB Jacob Eason took the field in place of Wentz with a little over 2 minutes left and an opportunity to win the game. Any hope for a game-winning drive ended when L.A.’s Jalen Ramsey intercepted Eason on second down.

But that was far from the only opportunity the Colts failed to capitalize on. Indianapolis drove inside the Rams’ 10 twice in the first half and both times came away empty. The initial first-and-goal failure came when the Colts turned the ball over on downs after running four plays from L.A.’s 1 yard line. The second was a third-and-goal interception on a shuffle pass meant for Doyle.

Aside from that interception, Wentz played well with pressure routinely in his face. Under constant duress — 3 sacks & 11 hits — he completed 20 of 31 passes for 247 yards and a touchdown to Zach Pascal. Wentz also rushed for 37 yards on 5 scrambles and evaded countless sacks. His favorite target was second-year wide-out Michael Pittman Jr., who caught 8 of his 12 targets for 123 yards, including a 42-yard reception on third and long.

Although the defense had no answer for the Matthew Stafford-Cooper Kupp connection — 9 catches for 163 yards & 2 TDs for Kupp — the unit did pick off Stafford in the first half and come up with a big third-down stop to force a field goal with under 3 minutes remaining.

Special teams did their part for the Colts as well. Ashton Dulin recovered a fumbled punt attempt in the endzone for a touchdown, and kicker Rodrigo Blankenship was 3 for 3 on field goal attempts from 48, 46 and 35 yards out.

Indianapolis will travel to Tennessee next week looking for their first win of the season against Derrick Henry and the Titans.