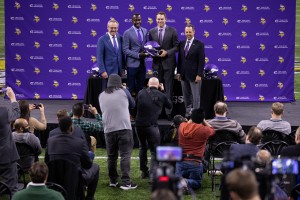 MINNEAPOLIS — Its a new era in Minnesota for the Vikings as management introduced fans and the media to the franchise’s 10th head coach Kevin O’Connell..

Coming off a super bowl win as the L.A Rams offensive coordinator, O’Connell wants to build a similar system to what has made his former team successful.

Taking an offensive minded approach, O’Connell plans to call the plays and has previous experience working with starting quarterback, Kirk Cousins, in Washington.

Just as the ownership group wants a coach and general manager who can work together, O’Connell is excited to collaborate  with Kwesi-Adofo Mensah as both already have a relationship from their time with the 49ers.

“There is so much to be drawn to this opportunity for me, amazing ownership, there is a very talented roster already in place here, a lot of really really good football players that will play, that have played at a high level and I’m so excited in both, in all three phases of the game, offense defense, and special teams to get to work with these guy and to help put them in the best possible situation to have success,” O’Connell said.

O’Connell said he anticipates cousins to be back and plans to build a system around him and the other QB’s already on the roster.

DGF and Barnesville Play in Day of Baseball