The Stanley Cup makes its first ever appearance in Warroad. 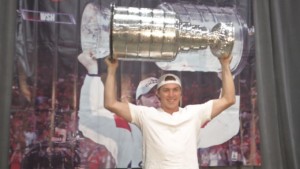 With the Washington Capitals winning the title this year, former Warroad Warrior T.J. Oshie knew exactly where to bring the prestigious trophy during his time with the cup.

Warroad claimed two state titles during Oshie’s high school career, moments that he said are right up there with winning the Stanley Cup. 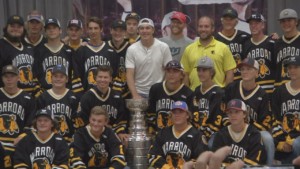 “At that point it felt like it could never get any better,” Oshie stated. “We leapfrogged it a little bit with the Stanley Cup, but to bring it back here with our banners showing there is pretty emotional and pretty special for me and my family.”

To put it in perspective of how much hockey means to this town, the population doubled in Warroard on what the mayor declared ‘T.J. Oshie Day.’ There are 1,700 people in Hockeytown, USA  and close to 3,000 people packed the rink today. 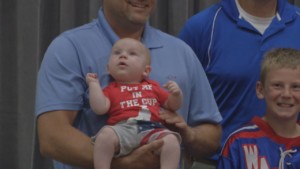 “We hadn’t even taken off yet and we heard that The Gardens was already getting pretty full,” Oshie said. “This is really truly an amazing turnout. I am very thankful that everyone came out to celebrate with us.”

There  were only two specific things that T.J. Oshie wanted to do when he brought the cup to Warroad; He wanted to share it with the youth hockey players of the area and take one more whip around the lake.

Oshie wrapped up his time with the cup in Minneapolis, hosting a private party with former UND forward and current Washington Capital Shane Gersich.