Duke Beat NDSU in Round of 64 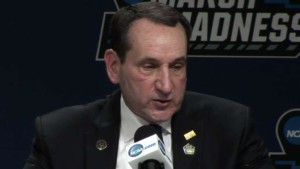 COLUMBIA, S.C. — North Dakota State Men’s basketball NCAA Tournament run came to an end last night in an 85–62 loss to number one overall seed Duke. Even in a loss, the result was a promising one.

The Bison led for the first 11 minutes of the game and trailed by just four at halftime before the Blue Devils started pulling away in the second half. NDSU earned respect from one of the top programs in the country.

After the game, Duke head coach Mike Krzyzewski did not hold back about how well his opponents played leading up to the big dance as well as some praise for guard Vinnie Shahid who led the Bison in scoring.

“The last month of their season, I thought they were the best team in their league,” Krzyzewski said. “They lost a heartbreaking game against South Dakota State at home which they dominated. That really knocked them back a couple games I think. They got it back and have been playing beautiful basketball, I watched at least six of their games. They’re extremely well coached. That kid (Vinnie) Shahid gives them a dominant leader and he played so well today especially in the first half.

OneFargo event celebrates efforts toward change in the Fargo-Moorhead community