Senior QB will make his first collegiate start on Saturday at No. 1 North Dakota State 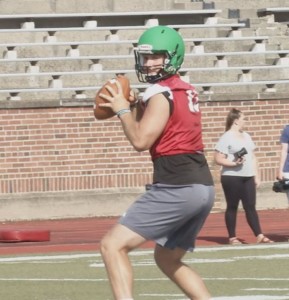 GRAND FORKS, N.D. – University of North Dakota head football coach Bubba Schweigert has announced on Thursday that senior Andrew Zimmerman will be assuming the starting quarterback duties for the foreseeable future, beginning this Saturday at No. 1 North Dakota State.

“We are very proud of how Andrew [Zimmerman] played in week one,” said Schweigert. “He’s a senior who has spent a lot of time here, and we are looking forward to him leading our offense at this point in the season. Sports medicine will continue to work hard along with Nate [Ketteringham] to work to get him back as soon as possible.”

The Monroe, Wash., native has appeared in 11 games during his three-year career at North Dakota, but will be making his first collegiate start on Saturday vs. the Bison. As a sophomore in 2017, Zimmerman finished 21-for-41 for 339 yards and three touchdowns in four games of relief. He made his debut appearance at Washington-Grizzly Stadium on Oct. 14, 2017 where he threw for 132 yards and his first collegiate touchdown, a season-best 62 yards, before tossing a career-best 179 yards and two scores in relief vs. Sacramento State.

Zimmerman was involved in a heated battled for the starting job and was voted a team captain by his teammates entering 2018 before giving way to Ketteringham as the QB1.

Last week in relief, the senior went 7-for-9 for 179 yards and two touchdowns vs. Drake to help the Fighting Hawks strike for 35 points in the second half and post a 47-7 win.

Prior to being sidelined with an injury, Ketteringham had made 20 consecutive starts dating back to his days at Sacramento State. There is no timetable for his return.

The entire coaching staff, Zimmerman, and Ketteringham will not be available for comment until following Saturday’s game.

No charges filed in crash that killed Manvel woman