Winter Comparison to Past Flood Years

As we near the end of January much of the region has a substantial snow pack. In Fargo the snow depth is at 16 inches which is much more than the 7 inches we had last year at this time. Most of the snow in 2019 came in February and March, but we are well behind the 27 inches on this date in 1997. 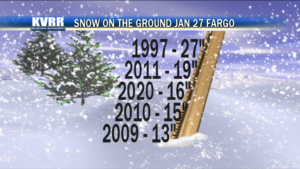 In Grand Forks it is a similar story with more snow on the ground then in recent flood years but much lower than 1997. 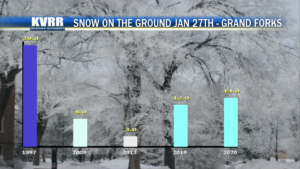 The water content of the snow is one of the key factors in determining the extent of spring flooding. As of this weekend, Fargo has just under 3 inches of water content in the snow, according to the co-op observer for the National Weather Service. Last year the snow pack was so low that no water analysis was done on it at this time.  The snow has less water in it than it did in 2011 and much less than the nearly 5 inches of water in 1997.  The last snow-water report from Grand Forks taken the weekend of January 18th, had a water content of 3.4 inches.  At this time we have not been able to acquire past snow-water data for Grand Forks but it is surely lower than the amount in 1997 given how much snow was in Grand Forks at the time. 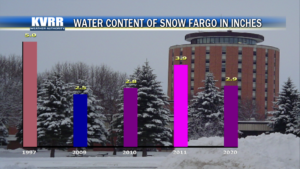 Snowfall to date is on par with other flood years excluding 1997 which saw record snowfall in both Fargo and Grand Forks.  Also as previously mentioned, 2013 and 2019 saw much more snow in February and March to bring the totals for those years up. 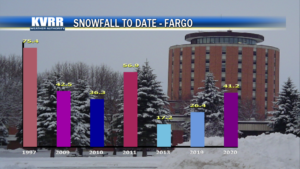 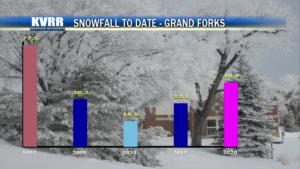 In the end, the key factor in having a manageable flood or a near record flood will be the amount of rainfall at the time of melting.