Social Distancing: Why Is ND’s Flag Featured On Paternity Court?

We’ve been sharing mask hacks with the CDC recommending we all wear a mask out in public during the coronavirus pandemic.
I made one out of a cut up t-shirt and the elastic band from a pair of shorts.

And Sue from Fargo sent us what may be the best mask I’ve seen yet on Twitter. 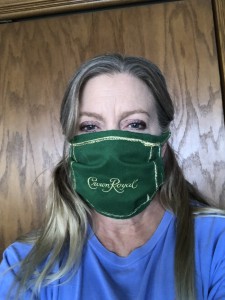 Check out that luxuriousness.
She says she used her grandma’s vintage sewing machine and a Crown Royal Apple bag to make what looks like a super comfy way to protect her face.
She says this is just the prototype. The next one will have the cord from the bag on the top row.
Just wait until after you’re done sewing to enjoy the whiskey, and I think you’re golden.
Thanks for sharing, Sue!

Another side effect of social distancing is a lot more TV time. I know I’ve been watching more, and I stumbled across a mystery.
I had the TV on KVRR when I was getting ready Thursday morning, and Paternity Court came on.
I’ve never really given the show much thought, but I was getting ready so I didn’t change the channel.

Then I noticed something behind judge Lauren Lake.

They film the show in Georgia. Lauren Lake has no ties to North Dakota that I can tell. She’s from Michigan.
But that flag has been behind her for years, next to the U.S. flag.
I tried looking it up, but no one seems to know for certain why North Dakota is so well-represented on a show where they determine if guys are the biological father to little kids.
I found a thread on Reddit that theorized that the North Dakota flag looks like the Great Seal of the United States.
But I don’t know for sure. It’s been driving me bonkers.
Do you have any idea why they’re using our state flag?

Please, tell me if you do. I don’t know if I can sleep at night until I figure this out.

If you’ve got extra time because you’re staying at home, put on your detective cap, grab a magnifying glass and start sleuthing. Let me know how you’re doing on Facebook and Twitter.
You can also watch Paternity Court weekday mornings at 11 on KVRR and see our state flag stand proudly, for some reason.