Get Super Distant In Your Social Distance Adventures

If you haven’t noticed, I’m on a bit of a roadside attractions kick. Weird statues. Historic buildings. It’s one way of exploring our area while we ease back into branching out further and further from home.
There’s a website that’s been invaluable for finding stuff like that. Roadside America.

They put out a blog a couple weeks ago specifically designed for people looking for the most social distance possible as they explore.
It highlighted places that attract few people even during normal times. They called it, “Sad Solo Shrines”. It featured sites around the country, including one in our area, The Lonely Viking statue in Fort Ransom, North Dakota, reportedly built back in 1972.

So I went and checked it out, because of course.
It most definitely is a good place to socially distance.
Fort Ransom is about an hour and a half from Fargo, or a half hour south of Valley City.
The statue itself is about 25 feet tall and on top of a really steep hill. You can see me get progressively smaller as I climb it. That sucker was tough to go up.
It’s an odd site to behold up close. It’s all black. Huge mustache. When I was there it looked like it wanted to attack the sun in the sky. But it’s weird and I love weird.
It’s definitely a unique site to see, and Fort Ransom is a pretty remote small town.
Plus, it’s nice to see some actual hills in North Dakota.
And if you’re really immature, on your way back you can go through the community that might have the most sophomoric name in the entire state. 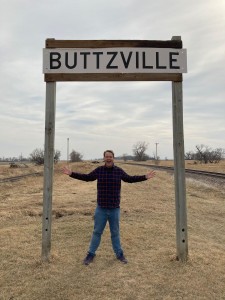 Buttzville. It’s so small it doesn’t even show up in the U.S. Census. From what I could tell when I was there, there was one inhabited home.
Basically it’s a few buildings and grain bins scattered along a dirt road. But there’s the railroad sign with “Buttzville” written in big letters. And that’s something your inner 10-year-old can appreciate.

The statue and Buttzville are only 15 miles apart, so if you’re looking for a socially distanced afternoon spent in a silly way, there you go.
Fort Ransom State Park is also nearby. I unfortunately didn’t have time to explore the park.
It’s on my list. What should I check out if I go there?
Let me know. Find me on Facebook and Twitter.

Two motorcycle riders hit by vehicle in Fargo, one person in serious condition