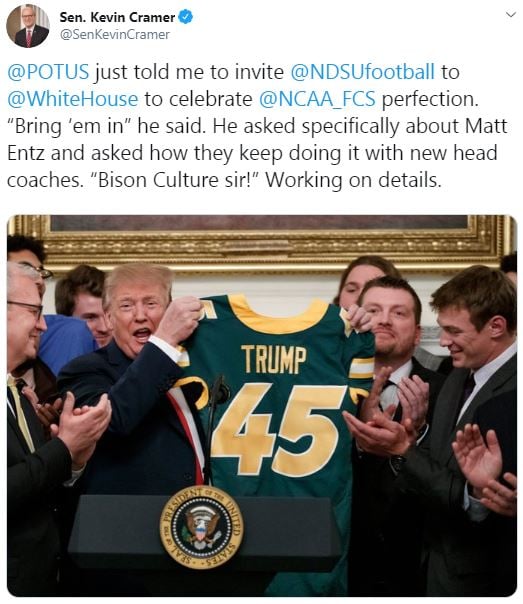 Sen. Kevin Cramer tweeted about the invitation from President Trump

WASHINGTON, D.C. — Sen. Kevin Cramer tweeted a photo saying the NDSU Bison football team is invited to the White House after winning the FCS National Championship. The tweet says President Donald Trump asked specifically about Matt Entz and “how they keep doing it with new head coaches.” The Bison visited the White House last March for the first time…. 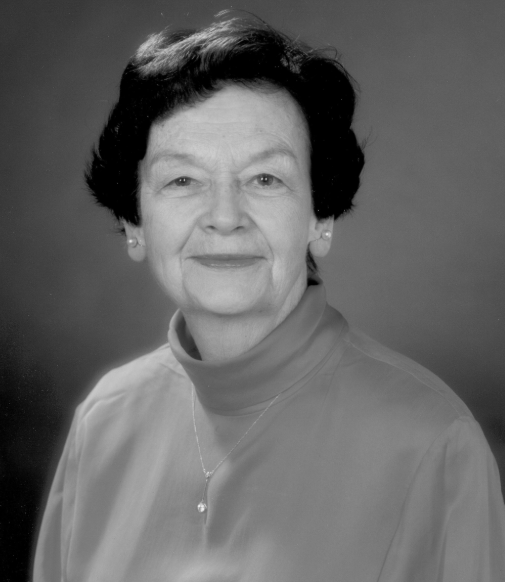 She served for three months in the Senate after her husband, Senator Quentin Burdick, passed away in 1992

WASHINGTON, D.C. — The first woman to represent North Dakota in the U.S. Senate is honored on the Senate floor. North Dakota Senators John Hoeven and Kevin Cramer introduced a Senate resolution to honor the life and service of the late Jocelyn Burdick. She served for three months in the Senate after her husband, Senator Quentin Burdick, passed away in… 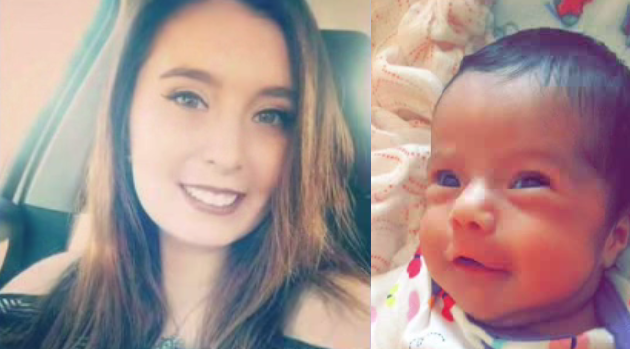 Savanna’s Act Moves To The Full U.S. Senate For A Vote

It is named for Savanna Greywind

WASHINGTON, D.C. — Savanna’s Act is finally heading to the Senate floor for a vote. Sen. Kevin Cramer says it was approved by the Senate Committee on Indian Affairs. He is urging the full Senate to act on it quickly. It is named for Savanna Greywind. The 22-year-old pregnant member of the Spirit Lake Tribe was murdered by a neighbor… 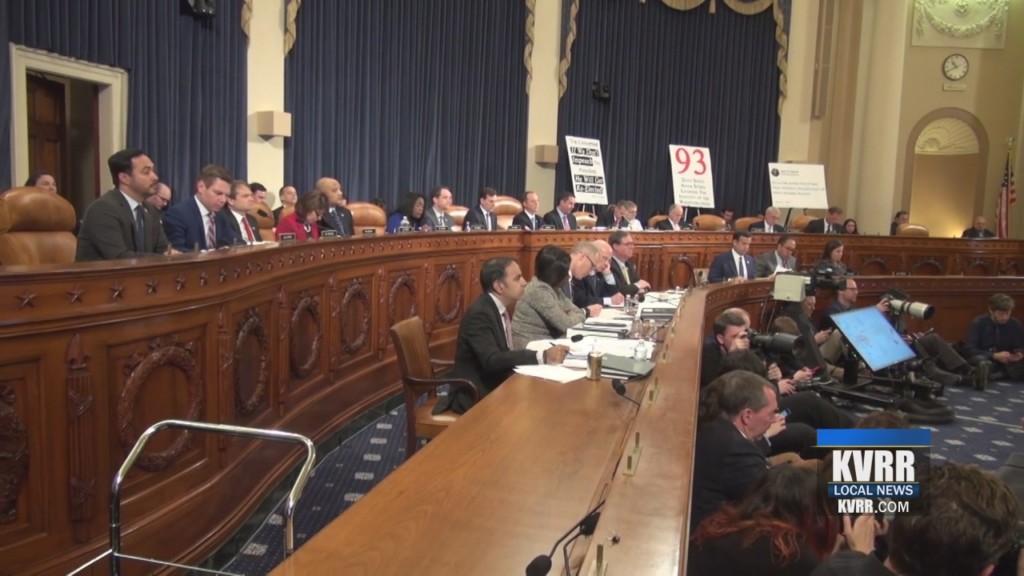 WASHINGTON, D.C. — North Dakota’s Republican congressional delegation is weighing in on the first day of hearings. Representative Kelly Armstrong calls it “political theater” and says we haven’t heard anything new. Sen. John Hoeven says the impeachment process has not followed precedent and has not provided President Trump with important due process rights. Pointless. That’s how Sen. Kevin Cramer feels… 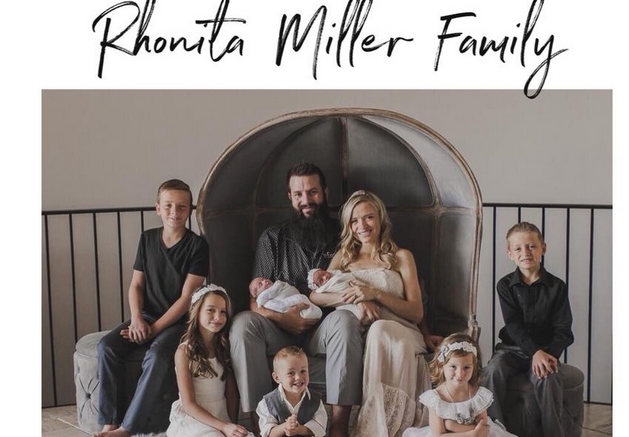 Victims Have Ties To North Dakota And Oil Industry 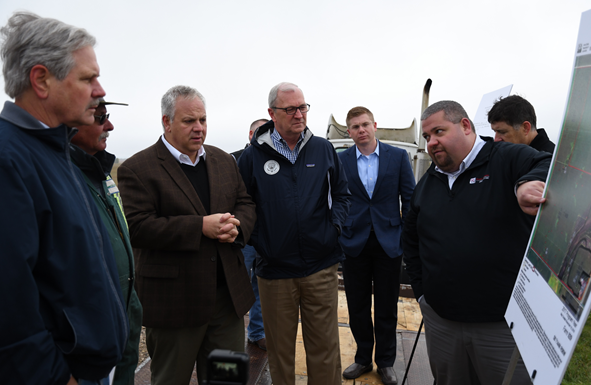 HOPE, N.D. — North Dakota landowners are voicing their concerns about the government’s handling of private property rights. They shared their concerns with Department of Interior Secretary David Bernhardt. He was the guest at a roundtable hosted by Senators Kevin Cramer and John Hoeven. Bernhardt also visited the property of Mike Johansen, a North Dakota landowner. He says he has…

WASHINGTON — The EPA is repealing the Obama-era Waters of the United States rule. It extended federal authority and protections to streams and wetlands. The move is being welcomed by North Dakota’s Republican leaders including Gov. Doug Burgum and Senators John Hoeven and Kevin Cramer. The 2015 regulation, commonly known as WOTUS, defined what bodies of water are protected under… 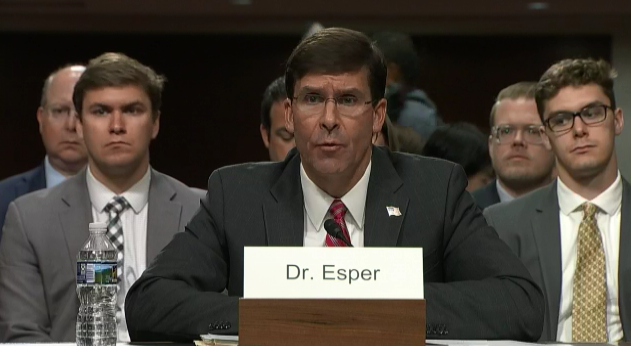 WASHINGTON, D.C. — North Dakota Senator John Hoeven has spent some time getting to know President Trump’s latest secretary of defense nominee. Hoeven, who is a member of the Senate Defense Appropriations Committee, met with Mark Esper. He outlined the importance of North Dakota’s nuclear and unmanned aerial systems missions to the nation’s defense. Hoeven also talked about the need…

The Veterans Crisis Line, which was created in 2007, has answered more than 3.5 million calls

WASHINGTON, D.C. — A group of bipartisan Senators, including North Dakota Sen. Kevin Cramer, have introduced the SPEED act to help veterans in distress. The Suicide Prevention by Eliminating Excessive Digits Act requires the Federal Communication Commission to designate a 3-digit dialing code for veterans in crisis. It is similar to 9-1-1 and would connect directly to the Veterans Crisis… 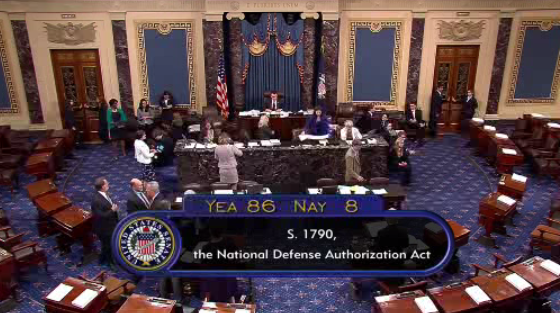 WASHINGTON, D.C. — The Senate has passed a massive $750 billion defense bill on a bipartisan vote of 86 to 8. The National Defense Authorization Act, or NDAA, authorizes spending and provides policy outlines for the Pentagon. The bill includes a 3 percent pay raise for members of the Armed Forces. It authorizes $350 million in funding for upgrades to…