Authorities say the shooting does not appear to be random

UPDATE: A man accused of killing another man on the White Earth Reservation is behind bars.

18-year-old Ronald Thompson the third was arrested in Saint Cloud around 2:30.

UPDATE: The Becker County Sheriff’s Office is searching for 18-year-old Ronald Thompson III of Detroit Lakes as a suspect in the shooting death of 27-year-old Jamie Bevins Jr. of Ogema.

Authorities say Thompson III is known to carry guns and has felony warrants for gun and parole violations.

BECKER CO, MN — The victim of a shooting in Maple Grove Township has been identified. 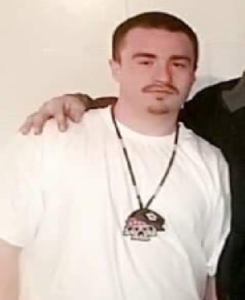 Bevins was shot early Sunday morning during a gathering at a house about 20 miles northeast of Detroit Lakes.

Authorities say the shooting does not appear to be random.

No arrests have been made.

A family member says they have questions about why it took police 45 minutes to respond to the scene.

Bevins was in the news last month after he was arrested on multiple warrants after a high speed chase in Becker County.

LIVE: Stick It To Cancer