Second Lady Karen Pence says in a Fox and Friends interview that her husband, Vice President Mike Pence, didn’t know about Mayo Clinic’s mask policy while at the facility.

“It was actually after he left Mayo Clinic that he found out they had a policy asking everyone to wear a mask. So, someone who’s worked on this whole task force for over two months is not someone who would have done anything to offend anyone or hurt anyone or scare anyone,” Pence explained. 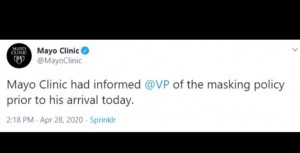 Pence’s comments contradict a since deleted tweet from the clinic saying the Vice President told about the policy.

Mr. Pence said on Tuesday he didn’t wear a mask because he frequently gets tested for the coronavirus.