There were no high school sports this spring, but a fierce high school battle ends Wednesday.
64 teams entered the Minnesota State High School League Nickname Challenge. Two are left. One of those is our very own Moorhead Spuds.
The Spuds have mashed the competition to this point. But we don’t know yet if they can scallop to victory.

With a thin cut, shoestring lead right now, the Blooming Prairie Awesome Blossoms are in front. Moorhead led all day Tuesday, and now they need to catch up. Voting ends at 11 a.m. Wednesday. To vote you need to head to Twitter. Click here to go vote now. So far nearly six thousand people have voted. This poll is making headlines across the state.

Now we all love the Spuds around here. It’s fun. The name grabs people’s interest. The orange and black color scheme is pretty unique when it comes to sports. But let’s dive into the history that makes the Spud name so iconic.

The invaluable Moorhead Spuds History Twitter and Facebook pages shared these pics.
They say this is the first known photo of the Spud name being used for Moorhead High School sports. This is the 1922-23 basketball team.
A school publication reportedly wrote later that year, “the name Spud was chosen to advertise the crop making Moorhead famous”. 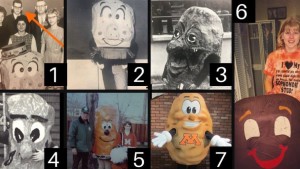 Spuddy the mascot didn’t come along until the early 1960’s. That’s the number one image on the top left. It was made out of paper mache by Moorhead student Brian Coal.
Spuddy number two was stolen in the mid 60’s by Detroit Lakes High School Students and burned.
The newest Spuddy, number seven, came in the early 2010’s courtesy of the Spud Boosters and MHS Student council.
I think I’m partial to Spuddy number three, although he looks like a pretty bakes potato.
You can help honor the legacy of the Spuds and pluck those Blossoms.

Is this the competition you’re craving without sports going on during COVID-19? Tell us why you’re a Potato Head.
You can find me on Facebook and Twitter.