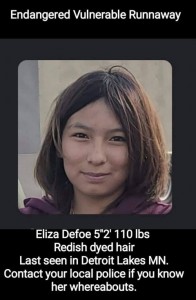 A teen is missing who was last seen in Detroit Lakes two days ago.

Bemidji Police say 14-year-old Eliza Defoe appeared to voluntarily leave Detroit Lakes on April 8th with a friend.
They say it’s believed she is heading towards Bemidji or possibly in the Red Lake area.
Her father provided a photo to KVRR and says she may also have crossed over into North Dakota.
Eliza is either 5″1′ or 5″2′ , 110 lbs. with browns eyes and short black hair.
She was last seen in a white jacket with yellow and white Crocs shoes. She has a pierced right nostril and pierced ears.
Bemidji Police say the case does not appear to be suspicious.
If you know any information about Eliza’s whereabouts, please call Bemidji Police at 218-333-9111.

Shop For A Cause In Support Of The Landon's Light Foundation