Some Things Will Never Come Back After COVID Goes Away

There’s a certain melancholy aspect to the pandemic eventually ending. Sure, it’ll be great to get rid of the COVID virus. But some things will have changed forever. Some things will be gone forever because of the pandemic. And while this admittedly is not anywhere near the biggest loss due to the pandemic, this one hurts me deeply.

A Colorado restaurant, made famous by ‘South Park,’ and one of my absolute favorite places in the world, has filed for bankruptcy.

People in Denver and beyond have been enjoying ‘Casa Bonita’ for 46 years.

The restaurant featured a 30-foot waterfall, cliff divers, arcade, roaming mariachi bands, puppet shows, a cave, and some of the least-authentic Mexican food ever, but *fantastic* sopapillas.

It was also the subject of a classic episode of ‘South Park.’

However, according to a document from a U.S. bankruptcy court, ‘Casa Bonita’ filed for Chapter 11 bankruptcy on April 6th.

That’s after it shut its doors at the beginning of the pandemic in March 2020.

While the restaurant’s future appears uncertain, there’s hope for a return.

‘Casa Bonita’s’ website says it will be ‘re-opening soon.’

And patrons are trying to help by starting a Gofundme effort on the restaurant’s behalf.

It is hard to overstate just how magical this place is for kids in that area. It’s a Mecca of loud, colorful fun that delights in how cheesy it is, both the food and the entertainment. I have vivid memories of there when I was three years old. I have fond memories of there from a couple years ago. 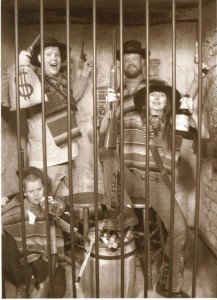 This is from their old-west photo studio, me and my family from almost 20 years ago.
The thought of losing this place because of the pandemic is almost too much to bear.

What has changed forever for you during the pandemic? Life will never truly get back to the way it was before. Let me know.
Find me on Facebook and Twitter.

Man who was missing for days found dead inside air duct

Names Released In Fatal Crash on I-29 Monday in Fargo

One person killed in I-29 crash in Fargo