LIVE: Yay! for the YEA! Winner

We're fit to be tied over this girl's brilliant idea for a new business.

Shark Tank is going to the dogs.

The Chamber’s Young Entrepreneurs’ Academy Investor Panel Shark Tank has a winner this morning, and she’s headed to Rochester, New York for the national competition.

That is, when she’s not at her day job, which is being a 7th grader at Ben Franklin Middle School.

Granted, it’s special that a kid who’s only in middle school has the smarts to take on a piece of the ever-growing, $72.1 billion pet retail industry.

But you may be wondering what’s so special about bow ties for dogs. It’s been done, right?

Not so fast. Mastrud combines her hand-made dog bow ties with coordinated socks for the owners to wear.

“Because twinning is winning,” Mastrud said.

Mastrud sat down live in-studio with the Morning Show’s Emily Welker to talk about how her three dogs inspired her business idea, how she crafts the bow-tie/sock combos, and how to convince your dog to get into the idea of wearing a bow tie.

(Spoiler: Welker’s attempts in the past to talk her dog into wearing a tie have met with mixed success. But Mastrud says she’s got a secret that makes her product much more wearable.) 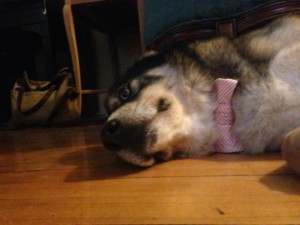