No one was hurt in garage fire 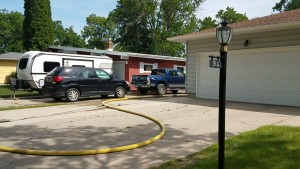 Firefighters say they got the call around 3:40 of a possible garage fire at 910 19th Avenue South.

On their way to the scene, they were told a tree had fallen on a electrical line and that smoke was filling up the garage.

When crews arrived on scene, they saw smoke coming out of the vents on top of an unattached garage.

Crew were able to knock down the flames quickly.

No one was hurt.