Meet Phantom! He’s a 9-year-old German Shepard. He’s a laid back older fella, but he still has a playful streak in him and loves a tennis ball or two.

Phantom is also available for the senior-to-senior adoption program since he’s an older dog. His adoption fee would be waived if he’s adopted by someone 65 or older.

They want you to deck out your pets in 90’s gear and come out for the vehicle parade at 6 p.m.

Click here to donate to the Paws Walk fundraiser. 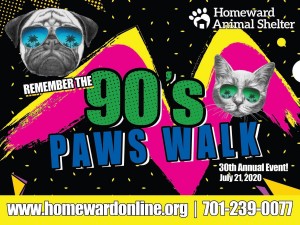 Also, a kitty who loves to be the center of attention is still looking for some this morning. Gami graced our screens last week from Journey Home Animal Rescue in Grand Forks.
The three-year-old has a beautiful black and white coat and a big personality.
And he can still be yours! Gami wants someone to follow around and to pet him a ton. He’s not asking for much.